It’s hard to believe it is already March. I don’t know where the time has gone, but the good news is things start picking up now that warmer weather is just around the corner. You can view my full list of upcoming spring events and festivals here. In the meantime, here are a few suggestions of fun things to check out for the weekend of March 4th through the 6th.

First Friday in Raleigh
It’s a new month which means another great chance to check First Friday in downtown Raleigh. I recommend stopping by Brew Coffee to for music drinks. Also visit the inaugural First Friday event at Devolve Moto on Glenwood Avenue. Live painting of custom helmets, and Brooklyn Brewery Beer for $3. The market on Hargett Street in front of The Morning Times is always a lot of fun as well. Events typically run 6-9pm.

Patchwork Market at Fullsteam Brewery in Durham
The Patchwork Market is a monthly market with makers and vintage vendors. The market is held the first Saturday of the each month from 12-4 PM at Fullsteam Brewery in Downtown Durham. Local makers and vintage vendors will come together to create a unique shopping experience with a diverse selection of high quality and original goods.

Public House at the Cookery in Durham (UNC v Duke)
This Saturday at The Cookery in Durham catch the Duke vs. UNC basketball game on a 15 foot HD big screen starting at 6:30 p.m. Doors open at 5:30 p.m. DUKE vs. UNC starts at 6:30 p.m. Free and open to the public! Pie Pushers food truck will be on site selling pizza and spicy, dry-rubbed wings, and other snacks. The Sweeter Side will be serving dessert, including their French macarons, tarts, and more! Beer, wine, and cocktails will be available for purchase.

The month of February is starting off with a busy weekend. Here are my top picks of things to check out for the weekend of February 5th through the 7th.

Olympic Trials Send off at Runologie
Meet Raleigh’s 2016 United States Olympic Trials Marathon Qualifiers this Friday, February 5th at Runologie. Sir Walter Running will co-host a First Friday reception/send off, which will be held from 6-8 pm, with a “Question and Answer” panel with the athletes starting at 7pm. Trophy Brewing will provide beverages and Pat Price will have his Prefon (Peach) Saison to sample. Details here.

Artist Opening for Ben Night Art at Rebus Works in Raleigh
Rebus Works is proud to present new works by artist Ben Knight. Join them and Knight for his First Friday Raleigh opening of unique, vibrant paintings on Friday, February 5 from 6 to 9pm. Please note Knight’s work will be on display for First Friday and during the The Saturday Market at Rebus Works only. They will also have beer from Fullsteam Brewery and the Cockadoodlemoo Truck. Details here.

Patchwork Market at Fullsteam
The Patchwork Market is a monthly market with makers and vintage vendors. The market is held the first Saturday of the each month from 12-4 PM at Fullsteam Brewery in Durham. Local makers and vintage vendors will come together to create a unique shopping experience with a diverse selection of high quality and original goods.

Big Boss Run Club
My Favorite brewery supported run club meets all winter long at Big Boss Brewery each Sunday at noon. Multiple distance options and all runners are welcome. This weekend they will have the Arepa Culture Food Truck. An Ambassador from the All American Marathon will also be on hand to share news about the upcoming race in Fayetteville on April 3rd.

Now that the Triangle has thawed out it is time to get out and explore. Here are a few fun events this weekend that caught my eye:

Friday
Peter Lamb and the Wolves Trio returns to the NC Museum of Art for a night of jazz music and art. The museum’s “Art in the Evening” series is free and open to the public. Music begins around 5:30pm. If you need dinner plans check out the Iris restaurant inside the museum. Reservations encouraged.

Saturday
Have you been to the Mystery Brewing Public House in Hillsborough? If not this is the weekend to check it out. Plenty of their excellent beers on tap and Curtis Eller’s American Circus & The Wiley Fosters play the taproom. Show starts at 8pm.

New Coffee Shop in Durham Opening This Weekend
Thanks to a post by my friend @MetroMonk on twitter earlier this week I learned about a new coffee shop opening on 9th street in Durham next Tuesday February 2nd. I don’t know much about the shop yet other than that it is called George’s Java and they appear to roast their own coffee beans. I’m looking forward to checking it out soon!

Tagged as Things to Do, Weekend Picks 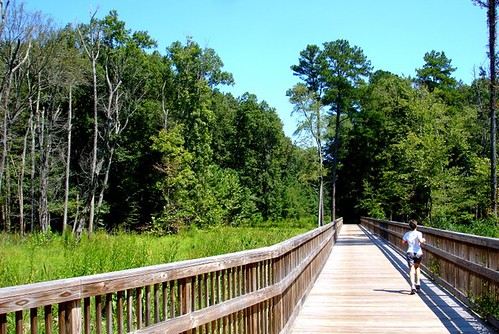 Looks like another weekend of great weather is coming our way. In addition to getting outside to enjoy Raleigh’s beautiful greenway this weekend I’ve put together a quick list of other local events that caught my eye. Happy exploring!

Blues on the Plaza at Northgate Mall in Durham
Northgate Mall hosts their “Blues on the Plaza” music series each Friday in May.  This Friday’s musical guest is the Jimi King Trio. They also have at least one food truck scheduled for each event. You can view the full schedule with bands and food truck lineup here: http://www.northgatemall.com/mall-events/blues-on-the-plaza/

Art After Hours in Wake Forest
It’s the second Friday, and that means it’s time to head down to downtown Wake Forest for an evening of family entertainment, food, and to see what the local merchants have on offer. The event brings out a good crowd of folks, and the evening cooler temperatures are a nice excuse to get out and around downtown. https://www.facebook.com/aahWF/info

Belgian Waffology Food Truck at Cocoa Cinnamon in Durham
On Saturday you have two chances to catch one of my favorite food trucks in Durham. From 8:30-11:30am the Belgian Waffle truck will be parked at Cocoa Cinnamon making for a great breakfast option. If you aren’t an early riser catch the truck later in the day from 12-4pm at Bull City Ciderworks. http://belgianwaffology.com/

Oaks & Spokes FrankenBike Block Party in Downtown Raleigh
FrankenBike is a bike parts swap held at Oak City Cycling Project from 1-5pm on Sunday May 10th. Bring all your bike parts that you’d like to sell or trade and get excited to buy, sell and swap! There will be food, music, beer and plenty of bikes, parts of bikes and bike-related fun! https://www.facebook.com/events/1559738290969827/

Six Sunday Concert Series at Joyner Park in Wake Forest
Bring the kids, friends, a picnic, and a blanket! The Six Sundays in Spring concert series is held on consecutive Sundays through the end of May. These free concerts are held at E. Carroll Joyner Park Amphitheater at 701 Harris Rd. in Wake Forest. The music will be starting at 5 pm and ending at 7 pm. This Sunday will feature music by the 18 piece Casablanca Orchestra. You can view the full music schedule here: http://wakeforestarts.org/events/six-sundays/

May ushers in North Carolina strawberry season and this weekend there will be plenty of berries to pick up at local area farmers’ markets. A few of my favorite markets are the Durham and Carrboro Farmers’ Market. There are also great markets in Wake Forest and North Hills in Raleigh. If you prefer to pick your own berries check out this list of local berry patches by Carolina Parent.

Tagged as Chapel Hill, Durham, Things to do in Raleigh, Weekend Picks

I can’t believe April is already almost over.  Fortunately there is plenty to do this weekend to end the month with a bang. Saturday is a particularly busy day. I’m keeping my fingers crossed that the weather cooperates. In the meantime see my rundown below of things to check out this weekend. Happy Exploring!

North Hills Beach Music Concert Series
The North Hills Beach Music series kicks off the 2015 season Thursday from 6-9pm with a live music by The Embers. This is a FREE concert series that takes place each Thursday on the courtyard at North Hills from April through the first week of August. It draws a big crowd so get there early! http://visitnorthhills.com/event/midtown-beach-music-series/

Art of Cool Project Festival
The Art of Cool Festival is a three-day music festival in Durham with two outdoor stages, five indoor venues and more than 30 world-class performances presented by Art of Cool. This is a ticketed event, but things launch Friday with a free Kick-Off Party from noon-5pm with live music and a food truck fest at Durham Central Park. This event is one of the premiere music events in the Triangle and I highly recommend checking out the group of great musicians it brings together for one special weekend in Durham.  http://aocfestival.org.

Front Porch Music Series at the Carolina Inn Chapel Hill
Fridays on the Front Porch features the music of some of North Carolina’s best bands for 27 consecutive Fridays from 5-8pm through late October. One of the area’s most popular musical groups, Big Fat Gap, starts things off this Friday. A new feature this year is the addition of food trucks. This Friday Chick-n-Que and the Chirba Chirba truck will be there to feed the crowd. http://www.carolinainn.com/about/chapel-hill-event-calendar

Live Music at Sola Coffee
Sola Coffee & Cafe remains one of my favorite places to see live music in North Raleigh. They schedule music almost every Friday & Saturday and have a great menu of food, coffee drinks, as well as craft beers and wine. This Friday they will have a cool indie folk duo based out of Montreal, Quebec called Bride & Groom playing guitar and cello. http://www.solacoffee.com/new-events/

Brewgaloo NC Beer Festival
A huge celebration of North Carolina Beer is going down this Saturday 2-10pm all along Fayettville Street. The event will have over 300 beers on tap from 70 NC breweries, over 45 local food trucks, and live music from 17 bands. Drink ticket pre-sales are available at local stores, Ray Price Harley Davidson and Galatea Boutique or online at http://shoplocalraleigh.org/brewgaloo/. Tokens will be on a special sale of 5 tokens for $20 through April 24! Pre-sales will also be able to arrive early to get their tokens, wristband and cup on the day of the event.

Seeds Pie Social in Durham
On Saturday from 1-5pm visit the SEEDS’ garden at 706 Gilbert Street in Durham for the 7th annual DIG Pie Social. There will be games, face painting, activities, music, and of course pie! Suggested Donation = $10 for 4 tickets. With your tickets you can get pie slices, and participate in games and activities. https://www.facebook.com/events/684754264981286/

Rescheduled to June 7th due to weather

Pop-Up Sunday at Ornamentea
POP-UP Sunday is this Sunday from 12-5pm in the Ornamentea Parking Lot. This event is an open air market, chock full of vintage clothing and housewares, recycled local art, food trucks and more. POP-UP Sunday is a FREE pet and family friendly shopping experience in downtown Raleigh that partners with local businesses to raise awareness for needs in our community. Always a fun time and a great way to spend a Sunday afternoon!
http://popupsunday.com/

Looking Ahead to Next Weekend:

Lobster Food Truck Debuts at Wake Forest May 2nd
Earlier this week local food truck blogger The Wandering Sheppard broke the news that the Triangle’s newest food truck, Cousins Maine Lobster, will make its first public appearance in Wake Forest at their annual “Meet in the Street” event on Saturday May 2nd. This is a new and exciting addition to the local food truck scene and I’m sure it will quickly become a fan favorite. To stay on top of all the breaking local food truck news and read in depth stories about the trucks and people behind them I recommend checking out The Wandering Sheppard’s blog. You can also follow him on facebook and twitter at @RUWandering.