Are you up to the Krispy Kreme Challenge? 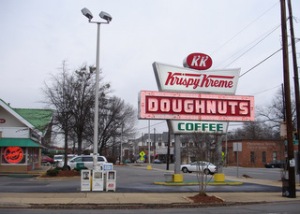 cause while wolfing down a dozen hot off the line Kreme donuts off course! I first heard about this event a few years back and think it is one of the more original concepts going in terms of local charity events. Known as the “Krispy Kreme Challenge”, it is an annual, student-organized race held in Raleigh to raise funds and awareness for the NC Children’s Hospital. Legend has it the “challenge” was born back 2004 as a result of a bet between a handful of NC State college students. The first challenge had a mere 10 participants but its popularity has caught on like wildfire and the race has grown in size in subsequent years with a massive 5,500 runners in the 2009. The “Challenge” has become one of NC State University’s most well known and beloved traditions. 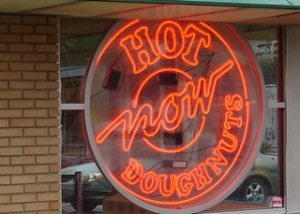 Here is how the challenge works. Participants start at the NC State Belltower on Hillsborough Street, and run 2 miles to the Krispy Kreme store located on Peace St. in downtown Raleigh. Upon their arrival the runners are greeted by a cheering crowd and promptly handed a box with a dozen tasty Krispy Kreme donuts. After downing a full dozen of the donuts, the runners must then run the two miles back to the NC State Belltower. If that isn’t challenging enough it all has to be done in less than one hour!

The challenge attracts a wide range of runners from beginners to serious competitors hailing from all corners of the country. With an expected participation of 6,000 runners expected at this year’s event, the 2010 race to be the biggest yet! The race is scheduled to take place at 9am on February 6, 2010. For more information and to sign up you can visit the official Krispy Kreme Challenge website here. Oh, in case you were wondering, the donut eating is optional.