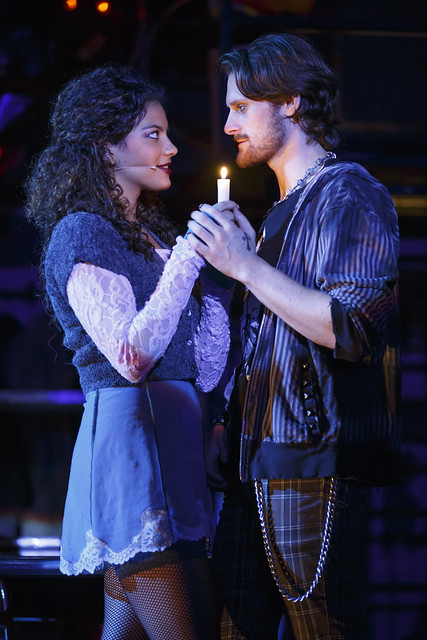 A lot has changes since RENT first hit Broadway in 1996. I saw it almost 13 years ago when I was briefly living just outside New York City. As I watched the performance this past Tuesday at the DPAC in Durham, I was struck by how this story about a year in the life of a group of young artists struggling to survive in the East Village, while dealing with addiction, love, and AIDS is still as relevant today as it was two decades ago. RENT ‘s powerful message still resonates. In the face of fear, reminds us to celebrate joy and measure our lives with the only thing that truly matters – love.

The overall feel of this 20th Anniversary production is simialr to the original, but the young casts injects a new energy into the characters on stage. It was exciting to learn that one of leads is played by a Triangle native. Aaron Harrington, who plays Tom Collins, went to Cary Academy and graduated from Shaw University before becoming an actor. He does a wonderful job playing the endearing character of Tom, an HIV positive professor who falls for Angel, a drag queen and street musician suffering from AIDS, played by David Merino.

Merino is excellent as the flamboyant Angel, injecting a positive energy on stage during the first act reminding each of the struggling characters to embrace what they have and live for today. Strong performances were also given by Danny Kornfield (playing Mark) and Kaleb Wells (playing Roger). Mark and Roger are struggling artists living rent free in an apartment with no heat. Roger is struggling with the life-changing news that he is HIV positive – a revelation he learns from a suicide not left by his girlfriend.

Mark and Roger can’t pay their rent, but their friend and landlord makes them a deal. They can continue to live in the apartment for free if they can stop Mark’s ex-girlfriend, Maureen, from holding a protest in opposition to his redevelopment plans for the block. The highlight of the first act is when audiences are first introduced to Maureen (played by Katie LaMark). She does a wonderful job with a bit of performance art in “Over the moon”, which is delivered as a comical protest song that had the audience laughing.

Rent remains a timeless musical with just the right nostalgia sprinkled that hints at it’s 90’s origins. In a time with so much uncertainty, RENT continues to remind us of the passion and unbreakable spirit that flows through each of us when travel through life focusing on what counts.

RENT plays at the Durham Performing Arts Center through this Sunday, October 16th. For more information and to order tickets visit http://www.dpacnc.com/events/detail/rent.