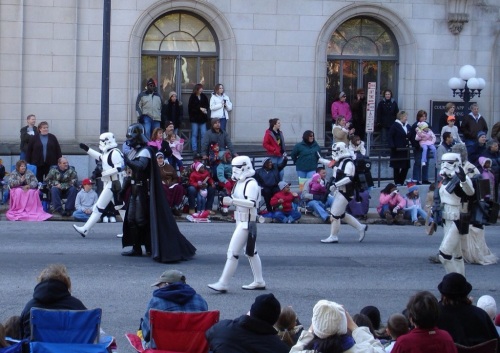 Yes it’s still November, but the Raleigh Christmas Parade is a lot of fun and I recommend catching it this Saturday, November 19th. The parade has always been held the weekend before Thanksgiving as the official kick-off to holiday shopping. You can read more about the parade history here at the Raleigh Public Record.

The parade typically lasts 2.5 hours and has all the things you would expect including floats, music, and various entertainers cruising through downtown Raleigh to huge crowds. My favorite was the year they had Darth Vader and Stormtroopers Marching though downtown.

There are lots of great places to view the procession, by my preferred spot to catch the action is on Fayetteville Street near the capital building. The parade kicksoff around 9:40am. For more information and to view the parade route map visit http://grma.org/christmas-parade/.