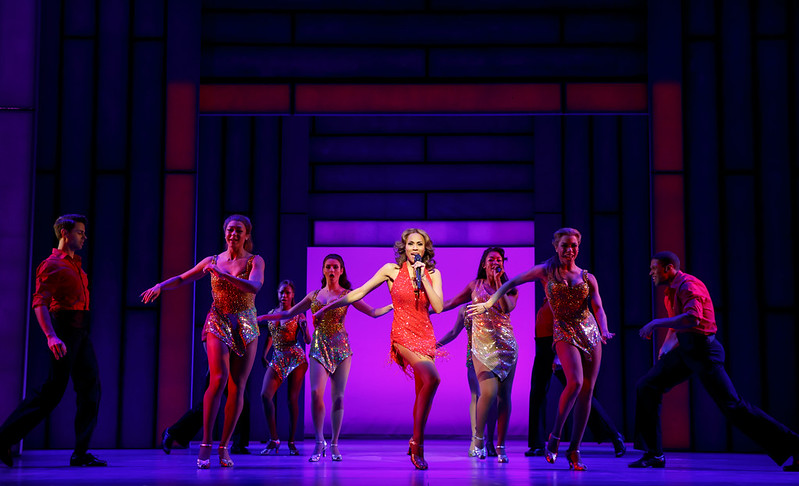 On Tuesday “The Bodyguard” opened at DPAC. Based on the hit 1992 movie of the same name the show in many ways is really a tribute performance to Whitney Houston and the songs she made famous. I went into the show expecting a fun experience that would teleport me back to my senior year in high school when Houston topped the charts with several hits from the movie’s soundtrack. The show delivered on the nostalgia, but what I didn’t expect was to be blown away by the vocals of the amazing Deborah Cox, who plays Rachel Marron, the role made famous in the movie by Houston.

Cox is a vocal powerhouse in her own right with Grammy nominations and multi-platnum R&B albums among her many impressive career accomplishments. Listening to her sing number after number throughout the evening was a real treat. She is in almost every scene of the show and sings almost each time she is on stage. How she pulls off so many wardrobe changes and delivers each song with such a powerful voice night after night is incredible. If you go into the show expecting a top-notch tribute to Whitney Houston you will not be disappointed.

Cox’s amazing performance is supported by equally stellar vocals from Jasmin Richardson, who plays Nicki, the jealous sister. Jasmin Richardson almost steals the show each time she is on stage. Her depiction of the supportive but jealous sister always in the shadow of her superstar sibling was perfectly delivered. The fact that when she sang she showed off a talent to rival that of Rachel added real substance to the conflict. The story and real life mirrored each other. It is no wonder that Richardson is the understudy for the role of Rachel Marron. Richardson, much like Nicki in the story, could easily fill the shoes of the lead role and be a superstar if fate would have it. 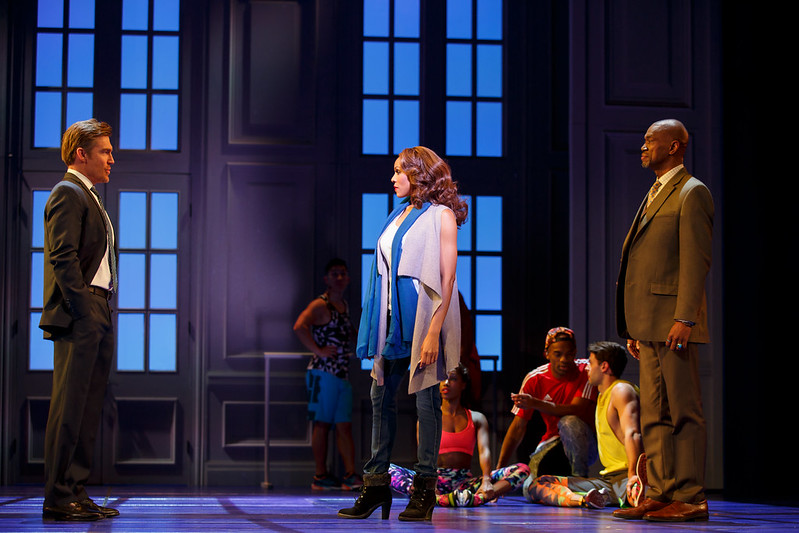 Judson Mills as Frank Farmer, Deborah Cox as Rachel Marron and Charles Gray as Bill Devaney in The Bodyguard
(Photo by Joan Marcus)

Judson Mills plays Frank Farmer, the reluctant Bodyguard to the Rachel Marron. While this role was made famous by Kevin Costner in the film, Mills does his best to make it his own. Mills version is just as masculine as Costner’s but a bit more laid back than the film version. He injects little bit of humor into the role. Mills doesn’t sing in the production, well except for one scene, but I don’t want to give too much away. Let’s just say it is a crowd favorite.

The ensemble of dancers for each number were all top notch – bringing a real life concert feel to each of the numbers in the musical. I think my favorite scene was when three drunk women in a bar do a hilarious karaoke rendition of Where Do Broken Hearts Go. Its kind of amazing how they nail singing poorly (on purpose). Its kind of hard to do and make it entertaining. But they totally nail it and get some of the biggest laughs of the night in the process.

The show has its moment when it has the 90’s feel. You can help but feel the tug of the 90’s when listening to some of songs you recall hearing so well on the radio back then. And in several scenes the ensemble are dressed in dance clothes reminiscent of the 1990’s. But the show is done in current time. With actors using cell phones in scenes, and talking about videos going viral on the internet. It was nice to see the story pulled into the modern times and not use 90’s culture as a shtick.

In many ways The Bodyguard feels like a mini-concert and an excuse to feature the hit songs of Houston. But if we are being honest that is what the audience is really there for and not the story. So if tribute a to Houston was the goal in that regard the production truly delivers. I expect to hear more great things from Cox and Richardson in the future. While they may be playing the superstar and supporting role in this production in real life they are both very much stars shining brightly.

“The Bodyguard” shows at DPAC through Sunday, March 19th. For tickets visit https://www.dpacnc.com/events/detail/the-bodyguard.