50 Year Old Time Capsule to be Opened at North Hills 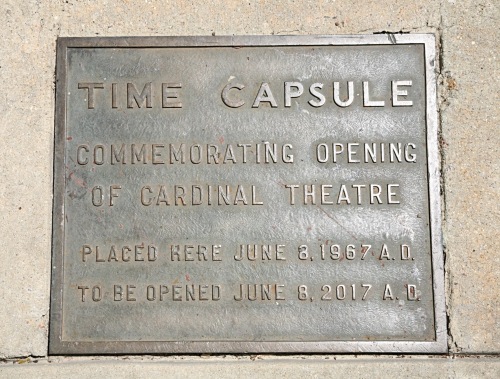 Next Thursday North Hills will open a time capsule that was buried 50 years ago to the day (June 8, 1967). The capsule was buried under the sidewalk on opening day of the Cardinal Movie Theater. That area has seen a bit of changes over the years. It is now referred to as the Lassiter District of North Hills. The movie theater is long gone but the capsule has remained in place for the past five decades resting between what is now the Verizon store and Bonefish Grill.

“We are excited to see what’s inside the time capsule here in North Hills,” said Bonner Gaylord, Managing Director of North Hills. “We look forward to taking a step back in time to discover the history of North Hills and the city of Raleigh. It should be a fun surprise.”

After purchasing the old North Hills Mall in 2000, Kane Realty Corporation also acquired the time capsule. Students of nearby schools and businesses contributed to the old container back in 1967, but the contents are unknown.

In conjunction with the unearthing, North Hills will bury a new time capsule to be opened in another 50 years with contributions from:

The unearthing will take place on June 8, 2017 at 10am near Bonefish Grill. The event is free and open to the public.