“School of Rock” Energizes The Stage at DPAC!

The “School of Rock” opened this past Tuesday night to packed house at the DPAC. I thought it was really cool that before the performance patrons were treated to some live music from Kidznotes as they lined up to enter the theater before the show. For those who may not know Kidznotes is a great local organization that engages students, pre-K through 12th grade, in an out-of-school musical program. It was the perfect start to an evening of inspiring performances by the younger generation on stage at DPAC.

The show itself was great fun. School of Rock tells the tale of Dewey Finn (played by Rob Colletti), a rock-star wannabee that is a bit down on his luck after getting kicked out of his band. He finds himself scrambling to find money to pay his roommates the rent and come up with the plan to fill in as a substitute teacher at a stuffy prep school and in the process transforms the kinds in his class into a killer rock band. 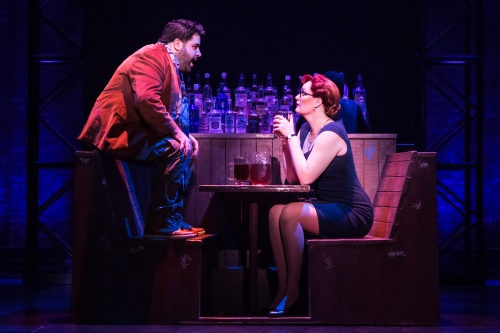 Colletti does a wonderful job in the role made famous in the film version by comedian Jack Black. It was impressive to watch him make the role his own and not fall into the easy path of just impersonating Jack Black. His chemistry with the kids is great too. He can be the aloof irresponsible teacher one minute and the thoughtful soul the kids need for support the next, without making the role sappy.

Equally impressive is Lexie Dorsett Sharp as Rosalie Mullins, the prim and proper headmistress of the school who has a hidden passion for rock and roll. With the twist on her role we are introduced to one of the two major difference between the stage production and the movie. First there is a love story between Rosalie and Dewey. This is a musical after all! Second, while Dewey is the still the central character the theater production does a great job of delving more into the backstory of the kids in his class. There relationships with their parents at home, and the challenges they face in the competitive environment of their school.

While the entire cast does a great job, it really is the kids that steal show. Their acting chops are developed well beyond their years and most of all they are really playing those instruments on stage! I think my favorite was watching Theodora Silverman, who plays the cello before Dewey arrives at the school transform into an awesome rock band bassist.”You’re In the Band” and “Stick it to the Man” were my favorite numbers of the night and both were stuck in my head for hours after the show.

Long story short: If you love the 2003 film you will really enjoy seeing this production. But even if you haven’t seen the movie, you are sure to have a blast. The story is fun, the kids are amazing, but most of all everyone on stage really seems to be having such a great time that it become contagious and it will pull you in to the fun.

“School of Rock” has performances at DPAC through Sunday, December 3rd. For tickets visit https://www.dpacnc.com/events/detail/school-of-rock.