Get Ready to get “On Your Feet” at DPAC!

Gloria Estefan recently joined the latest class of Kennedy Center honorees, making her the first Cuban-American to receive the award. Next Tuesday audiences in Durham can see how it all started as DPAC kicks off the new year with The Broadway musical “On Your Feet!” based on the book by Alexander Dinelaris, the Oscar-winning screenwriter of the film “Birdman.” The musical tells the story of 6-time Grammy Award-Winning Music icons Emilio & Gloria Estefan and how they came to America to Cuba and changed the landscape of the music scene and formed their wildly successful Latin pop group Miami Sound Machine.

The musical takes fans through the highs and lows of the Estefans which includes their rise to pop music stardom and the infamous tour bus crash in 1990 that threatened to stop Gloria’s career. Fans of her work will love the production packed with songs. The show features over 20 of  their chart-topping, smash hits, including “Rhythm Is Gonna Get You,” “Conga,” “1-2-3,” “Get On Your Feet,” “Mi Tierra,” Don’t Want To Lose You Now,” and “Reach,” in addition to an original song written by Gloria and her daughter Emily Estefan. 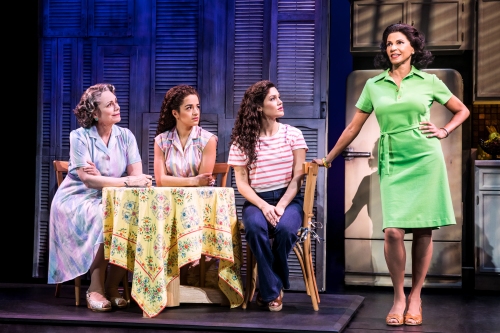 Alma Cuervo as Consuelo, Claudia Yanez as Rebecca, Christie Prades as Gloria and Nancy Ticotin as Gloria Fajardo in “On Your Feet”
(Photo by Matthew Murphy)

Last week I had a chance to speak to Nancy Ticotin, who plays Gloria Estefan’s mother, Gloria Fajardo, in the production. Ticotin, a veteran of film, television and theater, has appeared in films including “Ransom,” “The Wiz,” and “First Wives Club,” and television shows “Law & Order,” and “Orange is the New Black.” She is an original member of Ballet Hispanico of New York.

What’s it like to play Gloria’s Mother? Is it challenging playing a nonfictional character?
Well her character is the antagonist in the story. As you know, while Gloria and Emilio were in love, her mother did not approve of the relationship. She rejected him and she and Gloria did not speak for almost two years. It wasn’t until  Gloria’s tour bus was involved in an accident in 1990 that they spoke again. When Fajardo went at the hospital and saw a distraught Emilio there by Gloria’s side she hugged him and from that moment she accepted him. Luckily I had the opportunity to meet with Gloria Estefan and speak for hours with her about her mother. It is always a challenge playing a real person. It is always a challenge playing a real person. If it were easy I would get bored and I can’t grow. I’m always digging in. That way I’ll always have something to share with the audience.

Some describe you as a “triple threat” with your background in dance, singing and acting. How did that help you prepare for your part in “On Your Feet”?
The role of Gloria Fajardo fits me perfectly. I get to sing, dance, and act, and combine it with my ethnicity and there really aren’t too many roles like that out there for women my age and my background. It really is a wonderful to have this opportunity

What is your favorite part or number in the show?
There are two moments that really stand out in my mind. One is when Emilio is arguing with a record label executive about the crossover appeal of the Miami Sound Machine. The label wants them to record in Spanish but Emilio insists on recording in English. And tells the executive to look at his face and the ‘Whether you know it or not, this is what an American looks like’. That always gets a great response from the audience! I also love the number ‘You’ll Be My Party Time’. I’m in the scene bouncing in my chair and bopping my feet and singing along and need to remind myself to stay focused and ready for my next line and not get so caught up in the party!

What message do you hope people take away from seeing the show?
The story of Gloria and Emilio is the American dream. It’s a story of perseverance and hard work and never giving up and I wish the audience to leave with that strong message of hope in their hearts after seeing the performance.

“Get on Your Feet” has performances at DPAC Tuesday January 2nd through Sunday, January 7th. For tickets visit https://www.dpacnc.com/events/detail/on-your-feet.

One response to “Get Ready to get “On Your Feet” at DPAC!”