It has been quite a while since I last saw the 1985 movie version of “The Color Purple” based off Alice Walker’s 1982 book. I was curious how the touring production, directed by John Doyle, would tell the story without adding the razzle dazzle of fancy sets and catchy tunes so common among Broadway musicals. This show covers some serious subjects after all.

Well I received my answer when I attended opening night of the show at the Durham Performing Arts Center earlier this week and am happy to report that the stage production is done beautifully and in a way that allows the story to really focus on the characters and let their voices shine.

The musical retains much of Walker’s original story with its oppressive themes centered around the plight of black women dealing with abuse, poverty racism, sexism, poverty in the South during the early 1900’s.

However, two things distinguish the musical from the film. First off, the musical puts the emphasis on the damaged characters instead of focusing so much on the violence that causes the characters to be so damaged. Second, the story and mood is set to beautiful songs with a wonderful score that is filled with poetry and a multitude of African-American musical styles including gospel, ragtime, blues and swing. 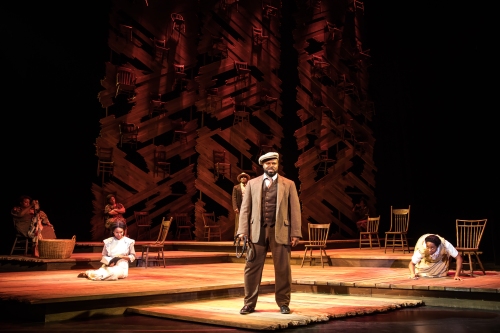 Gavin Gregory (Mister) in the North American tour of “The Color Purple”
(Photo by Matthew Murphy, 2017)

The entire performance takes place on an unchanging set with multilevel platforms and a few chairs that get moved around during numbers. The focus of this show is the vocals and the performers – not the background.

The show opens with Celie (Adrianna Hicks) when she’s 14 years old and pregnant with her second child which she is forced to give up. The father of her children, a man she calls Pa, marries her off to Mister (Gavin Gregory) along with the dowry of a dairy cow.

Celie’s life with Mister is a sad existence filled with pain and suffering as Mister abuses her in every way including severing Celie’s contact with her sister, Nettie (N’Jameh Camara). Beaten down, Celie eventually finds hope and courage through Sofia (Carrie Compere), a strong willed woman who takes no gruff from any man. Celie also finds love through her relationship with Shug Avery (Carla R. Stewart), a blues singer who comes through town every few months to perform.

All three Actors deliver amazing performances and their vocals are outstanding. In fact much of the cast in the touring production comes directly from the shows engagement on Broadway. Throughout the evening I found myself in constant amazement of the incredible talent on stage. It is a real treat to see such amazing performances delivered by the incredible cast of this production.

The tone of the show is understandably somber given the subject matter, but in the end this is all balanced out by the personal growth we see from Celie in the more upbeat second act as she breaks out of her oppressive situation and finds her footing in a life where she has her own voice and lives her dream.

“The Color Purple” is the type of show that makes you feel and think about some hard truths of past, but somehow it still finds a way to entertain you along the journey in a way that is respectful to the subject matter. This is not a show to be missed. A limited number of tickets are still available and I recommend you go see it before this incredible production leaves town.

This national touring production of “The Color Purple” is currently playing at the Durham Performing Arts Center through April 8th. For Tickets Visit: https://www.dpacnc.com/events/detail/the-color-purple