“Miss Saigon” on stage at DPAC Through Sunday! 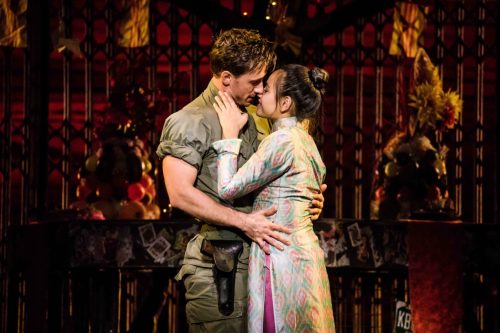 Although it has been around for almost 30 years now, this past Tuesday at DPAC was my first time seeing “Miss Saigon“.  As I understand it, the musical has been updated a bit by current director Laurence Connor so you may notice a few changes if you are familiar with the original production by Alain Boublil and Claude-Michel Schonberg. However, the central story, inspired by “Madam Butterfly” remains the same.

The musical tells a love story with a tragic path, set in war torn Vietnam. It revolves around the relationship between Kim, a Vietnamese villager (played by the talented Emily Bautista) who has made her way from the country to Saigon after the death of her family. Kim ends up working at a brothel “Dreamland” under the management of “The Engineer” serving US soldiers. It is here that Kim meets a Marine named Chris (played by Anthony Festa). The two form an unlikely bond and fall in love only to be torn apart by the fall of Saigon and the evacuation of Americans from the country. Fast forward 3 years and Kim is struggling to survive having been left behind and left to raise Chris’s son that he doesn’t even know exists.

I don’t want to give away too much of the story from the second act and spoil it for others. Needles to say, this is not a particularly happy story, but it does have moments highlighting the enduring human spirit and the will to survive and provide a better life for those that we love. I’ll admit the brothel scenes are a bit brutal and degrading at times when you let it sink in that this sort of human trafficking was very real during the way, but your spirit is lifted with the focus on the love that develops between Chris and Kim when they first meet.

While the actors do a commendable job playing challenging roles and  with the vocals, the real highlight of this production are the elaborate sets and lighting. With its big budget sets and flashy designs that one would expect of a Broadway spectacular,  complete with a helicopter scene depicting the evacuation from the American Embassy when Saigon Falls.

Miss Saigon can certainly make you uncomfortable at times. Exploitation, abuse, and prostitution are hardly common fodder for entertainment. But if you go into theater with an open mind and look at this production as a cautionary tale you just may see the beauty in the tragic portrayal of human nature even with all its warts exposed.

“Miss Saigon” has performs through Sunday, January 27th at The Durham Performing Arts Center. For more information and to get tickets visit: https://www.dpacnc.com/events/detail/miss-saigon

One response to ““Miss Saigon” on stage at DPAC Through Sunday!”