Last week SunTrust Broadway 2019/2020 season launched and took audience members on a thrilling magic carpet ride with the premier of ‘Aladdin’ at DPAC. My wife and I attended the Thursday night opening along with a packed house to see the hit musical, based on the 1992 animated film, come to life on stage with a delightful performance that is filled with all the songs you love and a few modern twists on the story making for an evening the entire family can enjoy.

The show is filled with vibrant colors, exciting ensemble dance routines, dazzling special effects and of course all the catchy songs you know from the movie. The plot of the Musical stays true to the film and its roots in the centuries-old folktales including “One Thousand and One Nights”. It takes place in the fictional middle eastern city of Agrabah.

The central characters of the story remain the same, with Aladdin (Jonah Ho’Okano), a poor but gracious thief – a diamond in the rough if you will, who falls in love with a confident and strong-willed Princess Jasmine (Keanaonalani Kekoa), who is being pressured by her aging father to marry to provide an heir to his thrown. Korie Lee Bloassey plays the scene stealing Genie that helps Aladdin to become a prince in order to win over Jasmine. 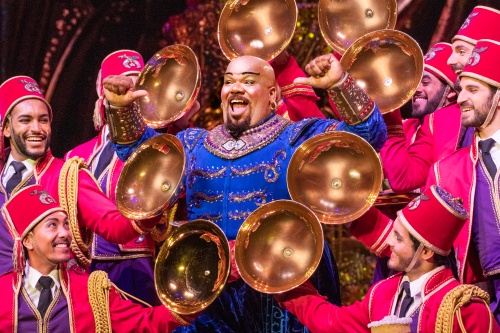 Every time Bloassey graced the stage all attention was on him, from breaking down of the 4th wall and imploring the audience to give him more applause (they did), to his show stopping rendition of “A friend like Me”, Bloassey and his laid back humor was the real star of the show.

The set and visual effects lived up to the high standards I have come to expect from Disney productions. The elaborate and colorful set designs made the city of Agrabah and the Sultan’s palace pop to life in dazzling fashion on stage. And the stunning magic carpet ride across a starry night in the dessert will leave you wondering how they pulled it off. In my opinion it is the highlight of the show and will leave you in awe of the magic & ingenuity of live theater.

It was also refreshing to see the Princess portrayed as strong character who struggles for autonomy as she tries to take charge of her own destiny, instead of a the tired damsel in distress trope. Some audience members may lament some of the animal characters being replaced by human counterparts for the stage production, but while there are a few adaptations like these to modernize the story and adapt it to the stage, I think the magic of the tale remains true and I think this production puts it together in a colorful show that will marvel audiences during its four week run at DPAC. 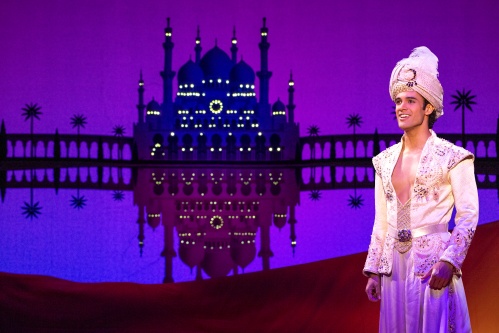 Disney’s Aladdin plays now through Saturday, October 26th at DPAC. A limited number of tickets are still available and can be purchased here: https://www.dpacnc.com/events/detail/aladdin