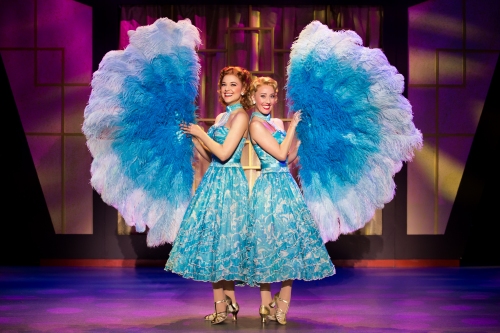 The 1954 classic Christmas movie “White Christmas” is one of my favorite movies to watch this time of year. It was a real treat to see the wonderful touring musical production open at DPAC this past Tuesday and I highly recommend fans of this holiday classic scoop up tickets before the show draws its final curtain in the Bull City this Sunday.

The theatrical version of the musical follows closely the original 1954 movie starring Bing Crosby and Danny Kaye as two World War II vets that team up as singing duo after the war. In the film Rosemary Clooney and Vera-Ellen play the Haynes sisters who have their own travelling act. The four entertainers come together through a series of hijinks and ultimately to try and save a Vermont inn owned by General Waverly, who lead the men on the battlefield during the war. Sadly, a heat wave has struck Vermont and the lack of snow has put a damper on the inn’s bottom line during the holidays and the bills are starting to stack up. 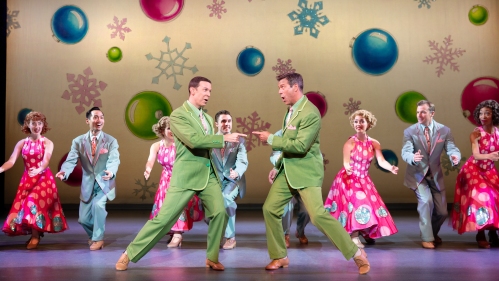 Working together the four come up with a plan to put on a holiday how to help out the general and save the inn just in time for Christmas! Of course along the way a romance begins to develop between each of the sisters and Wallace and Davis so you just know there will be a few bumps in the road in this holiday tale.

The four leads – Davis Elder (Bob Wallace), Jeremy Benton (Phil Davis), Kerry Conte (Betty Haynes), and Kelly Sheehan (Judy Haynes) all do a wonderful job filling the big shoes of these legendary actors. It was a delight to see them bring the classic Irving Berlin numbers to life on stage, from the title song and endearing rendition of “Count Your Blessings Instead of Sheep” to Benton and Conte’s delivery of a spot on rendition of “Sisters” you will leave the theater humming these melodic numbers from Berlin.

The energetic cast puts a lot of energy into this performance and it shows. Sheehan in particular shines during the dance numbers as she is an absolutely fabulous tapper. Other standout performances include theater veteran Lorna Luft (daughter of the famous Julie Garland) with her funny portrayal of the inn’s concierge Martha as well as Conrad John Shuck as the stoic but warm former general and now owner of the inn.

The entire ensemble does a terrific job with vocals and the fancy footwork. There are several big “show stopper” numbers with the entire ensemble that dazzle the audience. One of the most memorable numbers of the evening is the addition of Berlin’s “I love a Piano” that is delivered with the entire chorus on stage performing an incredible tap number set to a red-black-and white backdrop that really brings the Broadway magic to the stage.

In fact, the set and costume design is wonderful throughout. There are lots of pastels and boldly colored backgrounds and seamless transitions from train stations to cozy Vermont barns that transport the audience in mere seconds. This show is true to the time period with sharp mid-century dress and dialogue that does not feel dated, but instead adds a level of class and authenticity to this classic story.

I really enjoyed this musical and think it is something both fans of the movie and newbies alike will enjoy. Happy Holidays!