It is a little hard to believe that RENT first hit Broadway back 1996. I’ve seen this musical three times since then. First in New York almost 17 years ago, and twice on tour now at DPAC. While the story remains unchanged, the energy of each performance has been a different each time as each cast puts their stamp on their character. I am still struck however by how this story about a year in the life of a group of young artists dealing with addiction, love, and AIDS in 1989 New York City remains as relevant today as it was more than two decades ago. RENT ‘s powerful message still resonates after all this time. In the face of fear, it reminds us to celebrate joy and measure our lives with the things that truly matter, friendship and love.

Mark (Cody Jenkins) and Roger (played by Coleman Cummings) are both struggling artists that can’t afford to pay the rent for their old apartment that coincidentally doesn’t’ have heat or electricity. But their friend and landlord makes them a deal, they can continue to live in the apartment for free if they can stop Mark’s ex-girlfriend, Maureen, from holding a protest in opposition to his redevelopment plans for the block.

The highlight of the first act is when audiences are first introduced to Mark’s ex-girlfriend Maureen (Kelsee Sweigard) who arrives on stage via motorcycle and delivers a hilarious (and intentionally overacted) protest song “Over The Moon” in the form of performance art that left the audience rolling. Aiyana Smash as equally impressive as Mimi, Mark and Cody’s drug addict neighbor who works as a dancer. She plays the love interest of Roger as the two struggle with opening up about the fact they each have AIDS. She truly shined during her signature number “Out Tonight” that was filled with energy as she kicked and danced along a platform high above the stage without missing a beat.

Other Standout performances include Shafiq Hicks who does a magnificent job and brings warmth to the endearing character of Tom, an HIV positive professor who falls for Angel, a drag queen and street musician suffering from AIDS, played by Joshua Tavares. This is Joshua’s first national tour, though you wouldn’t know it by his solid performance of this iconic character. In fact, I think I enjoyed his portrayal of Angel the most out of the three times I’ve seen the show. The chemistry between Angle and Tom is palpable throughout the show in comes to head during the sad but moving number “I’ll Cover You” in the gut-wrenching second act. 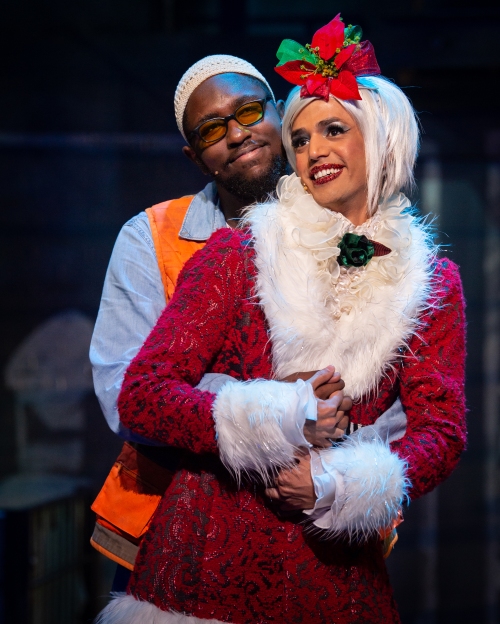 It’s difficult to believe this show started its journey more than two decades ago, but Rent remains a timeless musical with a few doses of nostalgia that hark back to it’s early 90’s origins. RENT serves as a reminder that the strength to endure and the compassion and support of our friends and loved ones is what can help us maintain that unbreakable spirit that flows through each and every one of us as we travel through life – as long as we focus on what counts.

RENT plays at the Durham Performing Arts Center through this Sunday, February 2nd. For more information and to order tickets visit https://www.dpacnc.com/events/detail/rent-1