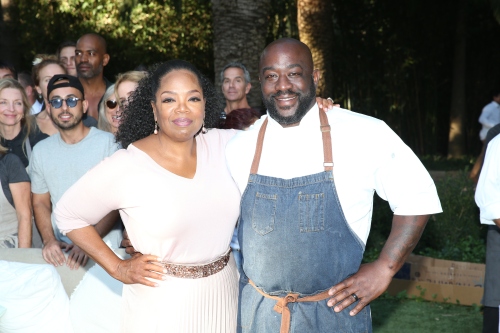 Renowned culinary entrepreneur, TV personality, and chef to the stars Kenny Gilbert today announced he will open a new restaurant called Cut and Gather in Raleigh in early 2020. The restaurant will be located in North Raleigh – at 13100 Falls of Neuse Road – and feature an all-day menu of wood fired Southern-style cuisine as well as weekend brunch. Expect an authentic flavor-forward menu of meats, BBQ, seafood, and other regional dishes cooked on custom-made woodburning ovens, grills, and smokers.

Affordable family-friendly offerings inspired by his Florida-born mom’s cooking will rotate in tune with local harvests. Welcoming portions served tableside in American cast iron will have guests reminiscing to time spent on relatives’ porches growing up across the South. A complementary innovative craft cocktail and bar program will highlight unique moonshine and bourbon creations.

The name Cut & Gather pays homage to Kenny’s collective culinary experiences – from cooking for superstars to reinterpreting for his own family and friends his favorite small-town styled recipes. Cut & Gather is intended as a showcase of his “tried and true” special chef dishes over the years.

Throughout his more than two-decade career, Kenny has been executive chef at some of the most lauded hospitality destinations in the country, including The Lodge at Sea Island Golf Resort in Sea Island, Ga., the Ritz Carlton properties in Amelia Island & Jupiter, FL, and The Inn at Lost Creek in Telluride, Colo., named one of CondeNast’s Top 40 Resorts in the U.S. He has launched numerous restaurants and helped design and develop James Beard recognized concepts like Yardbird, Khong River House, and Swine.

Despite humble beginnings, Kenny has cooked for the G8 summit during President Bush’s time in office, bested Bobby Flay on his own Food Network TV show, judged Food Network TV’s “Chopped Junior,” cooked for the ​Sports Illustrated​ Super Bowl party, appeared on the “Today Show,” and as a cheftestant on Bravo TV’s “Top Chef” (where he was voted season seven fan favorite with the nickname The Beast in the Kitchen). A sought-after headliner in food & wine festivals around the country, Kenny also cooks each year for Oprah Winfrey’s personal holiday meals and his recipes are regularly featured in O, The Oprah Magazine. Its current November cover proclaims Kenny’s Smoked Turkey as “My All-Time Favorite Turkey Recipe.”

“I first came to Raleigh in 2010 as a special chef guest at the annual Southern Women’s Show and was fortunate to experience firsthand the exciting level of food talent here even back then,” said Chef Kenny Gilbert. “Fast forward to today – national award-winning names such as friend and former Amelia Island colleague Scott Crawford have cemented the Raleigh food scene on the map. I am thrilled to plant roots here and add my own experiences and passion for reimagined Southern cuisine to one of the fastest growing areas of the country.”

Kenny is personally crafting the entire Cut & Gather dining experience – from menu development to handpicking and training his team – and looks forward to making his guests feel welcomed.

About Chef Kenny Gilbert
Born and raised outside Cleveland, Kenny’s curiosity for the kitchen started young. His mom noticed how captivated her son was when she cooked or entertained and began teaching him the basics.  Kenny’s father, an avid BBQ man, schooled him in the ways of the grill, including homemade sauces and rubs, presenting him with his very own small Weber at the age of seven.  By age 11, Kenny was cooking the family’s entire Thanksgiving dinner solo.  In high school, he was cooking at practice for his entire swim team, on a portable electric double burner in the locker room.

Kenny enrolled in a local vocational culinary program while in high school and after graduating, earned a degree in culinary arts from The Pennsylvania Culinary Institute.  Kenny began his career with The Ritz-Carlton Hotel Company as an apprentice in the garde manger kitchen of their acclaimed Amelia Island, FL property.  Kenny worked his way up to Chef de Cuisine at the age of 23, helping to consistently secure the AAA Five Diamond Award for the property throughout his tenure there.

With more than 20 years of industry experience, Kenny has run just about every area of Food & Beverage Divisions at the AAA Five Diamond and Mobile Five Star levels. His passion for fine dining is complemented by his vast experience across the entire spectrum of the culinary industry. From banquets to pastries, club and restaurant design to bar and lounge concepts, Kenny’s innovative and creative approach to the restaurant and hospitality industries is unmatched.  Follow Chef Kenny @ChefKennyG. 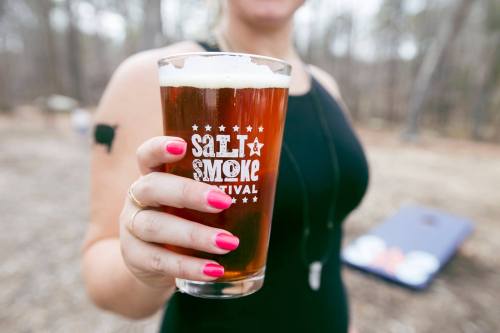 This festival is a taste of the South. They pick the best farmers and musicians, brewers and fishermen, cooks and craftsmen–people who have built a life in a place they love. And then we bring these people and their passion together for an afternoon of good food, music, and community.

Salt & Smoke is going to be a fun day to enjoy great food and drink while listening to musical performances by Big Fat Gap and Jonathan Byrd & the Pickup Cowboys, followed by a dance party to close out the evening!

To purchase tickets and read more about the festival info visit their website at https://saltandsmokefest.com/.

Friday – October 25th
Pumpkin Flotilla – Band Park, Cary
Dress in your favorite costume and join us for this special event! Bring your carved pumpkin from 4-5:30 p.m. and watch the pumpkins set sail across Bond Lake at twilight (6:30 p.m.). Enjoy food trucks, live music, face-painting, and discounted boat rentals prior to the flotilla. Float space is limited and is on a first-come basis. For more information, visit the Pumpkin Flotilla page.

Drum Circle – Downtown Cary
After the pumpkin flotilla head to downtown Cary for a family-friendly drum circle and the Cary Art Loop in Cary’s beautiful Downtown Park! One Tribe Rhythms will be hosting a drum circle with fire spinning by Caroleeena & Friends from 7pm to 8:30pm (the fire performance is at 8pm). Bring your instrument or borrow one of from the group! Join in the drum circle, singing and “low impact” West African dances. Downtown art galleries open their receptions at 6pm, new works of art are on display.

Saturday – October 26th
Roaring Raleigh Lawn Party at Moore Square – Downtown Raleigh
This unique 1920’s and 1930’s inspired event will feature dance performances and lessons, roving entertainers, model T cars, vintage clothing vendors and more in Moore Square from 11 a.m. to 5 p.m.! Attendees are encouraged to dress in 1920’s attire. There will prizes for best dressed and best picnic set up. Entrance to his event is free. Food and beverages will be available for purchase on site. For more info visit the Raleigh Parks website here.

This Friday from 5:30-8:30pm Triangle residents can enjoy rare opportunity to taste wines with a Master Sommelier for while they enjoy delicious Korean Food from the popular NC Bulkogi Food Truck.

This a fun free wine tasting is a casual event hosted by The Raleigh Wine Shop on Glenwood Avenue in downtown Raleigh. Master Sommelier Desmond Echavarrie will be on hand pouring a lineup of select premium California producers while the Bulkogi food truck will be posted up in the parking lot selling delicious Korean dishes.

The Free wine tasting will include the following California wines:

Visitors will have the opportunity to taste wines with Desmond, order some food from the NC Bulkogi and bring it inside the shop to enjoy with the tasting lineup at special prices by the glass or by the bottle.

Last Monday I attended the North Carolina Restaurant & Lodging Association (NCRLA),  fourth annual NCRLA Chef Showdown at Angus Barn’s Bay 7 event space in Durham. It was a fun night of fantastic food and drink celebrating some of the best chefs and mixologists in North Carolina.

Twenty chefs from across the State were in the final running for the savory and sweet titles, judged by a panel of industry experts based on the presentation and taste of the dish as well as the best use and number of local North Carolina ingredients on each plate. Attendees also voted for their favorite dishes and drinks to determine the People’s Choice award winners for Savory, Pastry and Specialty Cocktail & Distillery.

For more information about the NCRLA Chef Showdown, visit  ncrla.org/chefshowdown