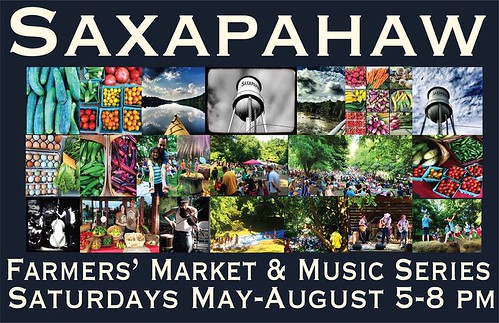 The weather forecast this weekend is looking quite nice which is great because there are a lot of fun events planned. I’ve included a number of activities in my picks this week. This week there is everything from sunrise yoga in downtown Raleigh to a market in Saxapahaw. No matter what you end up doing I hope you make it a great weekend!

North Hills Beach Music Concert Series
The North Hills Beach Music series continues into its second week this Thursday from 6-9pm with a live music by Liquid Pleasure. This is a FREE concert series that takes place each Thursday on the courtyard at North Hills from April through the first week of August. It draws a big crowd so get there early! http://visitnorthhills.com/event/midtown-beach-music-series/

UPDATE: Rescheduled to May 15th due to weather.


First Friday and Crude Bitters Open House
There is always lots to do in downtown Raleigh on First Friday. From checking out art studios to fire dancers on Hargett Street. I also recommend checking out the Crude Bitters Open House showcasing their classroom bar. We’ll have FREE Crank Arm Brewing Company beer and light snacks. https://www.facebook.com/events/1844266819130904/

Blues on the Plaza at Northgate Mall in Durham
Northgate Mall hosts their “Blues on the Plaza” music series each Friday in May.  This Friday’s musical guest is the Tornado Blues Band. They also have at least one food truck scheduled for each event. You can view the full schedule with bands and food truck lineup here: http://www.northgatemall.com/mall-events/blues-on-the-plaza/

Mystery Brewing Public House 2nd Anniversary – Hillsborough
Mystery Brewing in Hillsborough celebrates their 2nd anniversary this weekend. May 2nd is our Pub’s 2nd anniversary! A day long celebration on Saturday will feature food from Al’s Burger Shack from 12pm to 3pm, music by Juliana Finch at 6pm and Scott Barkan at 9pm. Of course there will be plenty of their beer with 16+ beers on tap including some new releases.  https://www.facebook.com/events/1575154876074615/

Raleigh Food Truck Rodeo
Downtown Raleigh will play host to another huge Food Truck Rodeo on Sunday from 1-6pm. Trucks will line Fayetteville Street from the Capital Building to City Plaza. Over 50 trucks are schedule to attend. You can see the full truck lineup here:  http://www.downtownraleighfoodtruckrodeo.com/food-trucks.html

Six Sunday Concert Series at Joyner Park in Wake Forest
Bring the kids, friends, a picnic, and a blanket! The Six Sundays in Spring concert series is held on consecutive Sundays through the end of May. These free concerts are held at E. Carroll Joyner Park Amphitheater at 701 Harris Rd. in Wake Forest. The music will be starting at 5 pm and ending at 7 pm. You can view the full music schedule here: http://wakeforestarts.org/events/six-sundays/