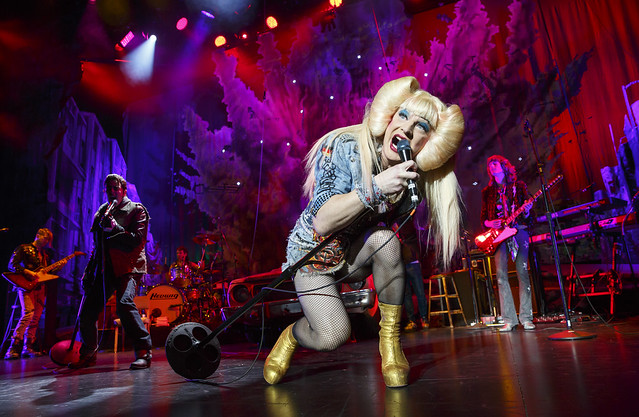 “Hedwig and The Angry Inch” opens next Tuesday, January 31st at the Durham Performing Arts Center. This hit musical based on the book by John Cameron Mitchell and music and lyrics Stephen Trask is described as a genre-bending, fourth-wall-smashing musical sensation, with a pulsing score and electrifying performances. It tells the story about Hansel, a young man from East Berlin who undergoes a clumsy sex-change operation in order to marry his boyfriend and escape to the United States only to be later abandoned.

The stage production is put on in a concert like format with the audience watching genderqueer rockstar Hedwig Robinson’s musical act as she follows the much more successful rockstar and former lover Tommy Gnosis’s as he tours around the country. Gnosis is recovering from an incident, involving Hedwig, that nearly ruined his career. Capitalizing on her notoriety from the incident, Hedwig is determined to tell the audience her story through her glam rock inspired performance growing more erratic and unstable as the evening progresses. The show is an emotional roller coaster that will take the audience to many new places. In a recent interview, the production’s associate choreographer described the show like this. “It is loud. It is bright. It is a rock concert. But the story is so touching.” 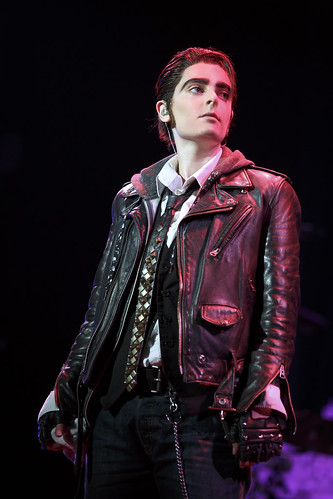 Hedwig is both aided and hindered by her assistant, back-up singer and husband, Yitzhak, played by Hannah Corneau. Yitzak is a complicated character –  A drag queen that has a toxic codependent relationship with Hedwig. Hedwig verbally abuses Yitzak throughout the evening, and it becomes clear that she is threatened by his natural talent, which she fears eclipses her own. I had the pleasure of interviewing Hannah Corneau last week to learn more about what it is like to play a complicated character and get insights on what to expect from the show next week.

After earning her degree in Theater at Syracuse University, Corneau has been dazzling audiences at top regional theaters across the country. She most recently appeared Off-Broadway as the stand-by in Daddy Long Legs for Jerusha Abbott at the Davenport Theater, and played the lead Eva Peron in Evita at the Marriott Theatre. Hannah joined the cast of Hedwig this past Fall in in what is her first touring production.

What is it like playing the role of Yitzak?
“Well this is the first time I have ever played a male character, which has been interesting. But more so than that, in the past the characters I have played were strong and determined. Yitzak is the first character that I have done that is vulnerable and submissive. He is in a codependent relationship with Hedwig, desperate to find his own voice.”

Can you tell us a little about the format of the show?
“Working in this production has been very exciting because it is kind of like traveling with a rock concert on the road. That’s because the show is put on as a concert. You have the band right on stage, not in the pit, and Hedwig is the performer singing to the audience. The production breaks down the ‘4th Wall” with Hedwig speaking to the audience in the Theaters just as if it were a concert”.

What is the message of the show? What do you hope audiences take away from seeing it?
“Hedwig is a Rock Goddess story of love and loss and ultimately empowerment.  I think people will leave the show feeling that you should move forward in life with confidence and open hearts. Find out who you are, love yourself, and practice acceptance of others.”

After speaking with Hannah I’m even more excited about seeing the show next week. It sounds like a powerful performance that will be as entertaining as it is moving. We could all use a little more love and acceptance in this crazy world. “Hedwig and the Angry Inch” opens at DPAC on Tuesday,  January 31st and runs through Sunday February 5th. For tickets visit https://www.dpacnc.com/events/detail/hedwig-the-angry-inch