The Magic of “Finding Neverland” Comes to DPAC May 23-28th!

This week the spirit of imagination comes to the stage when “Finding Neverland” opens at the Durham Performing Arts Center on Tuesday, May 23rd with performance through Sunday, May 29th.

Based on the Academy Award winning film of the same name, the musical follows playwright J.M. Barrie as he summons the courage to become the writer and the man he yearns to be. Barrie finds the inspiration he’s been missing when he meets the beautiful widow Sylvia and her four young sons.

Delighted by the boys’ hilarious escapades, Barrie uses the boys’ escapades to fulfill his dreams of becoming a writer. Inventing the world of Neverland and its imaginary inhabitants and in the process creates an original play that becomes a high-society hit.

The musical is packed with mesmerizing visuals, irresistible songs and plenty of laughs. It is a timeless story about the power of imagination and proof that you never really have to grow up. 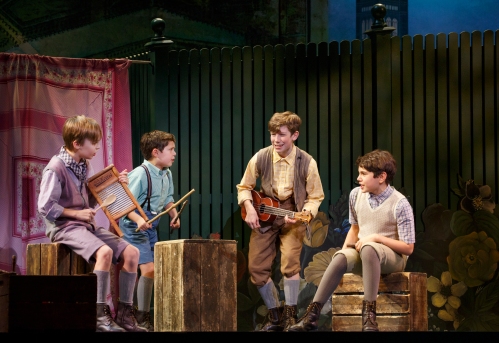 In this touring production, the role of Captain Hook is played by Broadway Veteran Tom Hewitt.  He took a moment to chat with me by phone recently between productions.

Hewitt started performing in his small hometown in Western Montana where he made the most of a great local theater seen and benefited from a loving and supportive family. “I am very thankful to my parents for allowing me to pursue theater as a kid. They were very supportive and really there is nothing more magical.”

Hewitt has made a career of playing bad guys and monsters, including on Broadway Pontius Pilate in Jesus Christ Superstar; Billy Flynn in Chicago; Dracula in Dracula and he has also played Scar in The Lion King. But he brings a unique perspective to playing Barrie’s inner Hook, given that he also played the Captain Hook in both the 1998 and 2011 national touring productions.

But this is a different Captain Hook than you’ve seen before. “This Hook is a is a facet of Barrie’s personality. His job is to encourage Barrie to “pirate up” if you will, explore his darker side and write his own story – basically he helps him find his courage and conviction,” says Hewitt.

“This really is a show for the entire family,” says Hewitt. “It is a show about a show focusing on love, family, and finding the strength to go after what you believe. And along the way there is little humor and special effects added to enhance the wonder”. When I asked about the special effects Hewitt explained that they are beautiful in their simplicity. “I love the way that flying is handled in the show, it is unapologetically theatrical. I am sentimental and it always moves me,” admits Hewitt.

The magic of “Finding Neverland” opens at DPAC on Tuesday, May 23rd and runs through Sunday, May 28th. For tickets visit https://www.dpacnc.com/events/detail/finding-neverland.