Lord of The Dance at DPAC – Ticket Giveaway!

Next Thursday, October 11th DPAC will host an amazing performance of Irish Dance. Lord of the Dance originally premiered in London two decades ago, and in 2014 Michael Flatley transformed the show making it even more thrilling than the original.

Lord of the Dance: Dangerous Games with music composed by Gerard Fahy premiered at the iconic London Palladium in September 2014 to mark the milestone 20th anniversary since Michael Flatley became an international sensation.

The production continues to thrill audiences around the globe with its intoxicating mix of dance and music that fuses the traditional with the contemporary in a classic tale that showcases the exceptional talent of the cast.

Ticket Giveaway!
I’ve partnered with DPAC to giveaway two tickets to the October 11th show in Durham. To enter leave a comment below and I will randomly select a winner on Monday October 8th. You can also enter by commenting on my Instagram post here.

I recently spoke by phone with lead dancer James Keegan in anticipation of the shows arrival in Durham. It was exciting to learn about how he got into Irish dance and how pumped he is to bring the production to Durham!

James was born and raised in Manchester but influenced by his parent’s Irish roots. James took up Irish dancing at the age of 4 and competed regularly among the Irish Dance circuit starting at a young age and winning his first title at the American National Championships at the age of 7. For the past 15 years James has been touring with the production. Only 10 months after joining the cast he was asked to perform the lead role of ‘Lord’ which he performed for the first time in Port Elizabeth, South Africa, and became the youngest dancer to ever perform the role.

How did you first become interested in Irish Dancing?
I’m from Manchester but I have Irish parents, and they wanted to keep the Irish culture alive so me and my siblings all danced and played Irish instruments starting at a young age. I entered my first competition when I was around five and started to win trophies. Over time you work your way through the “major” competitions like American Nationals, British Nationals, Great Britain Nationals, the Irish Nationals and the World Championships.

When did you realize you wanted to do it professionally?
I first realized I could do this professionally when I was eight back in 1994 and the family was watching Eurovision Song Contest  and saw Michael Flatley do Irish Dancing with a group.  A couple of years later when I was around 10 Michael created Lord of the Dance and I went to see it when it came to Manchester and thought this is what I do! It was just a dream for me at that point but now I am living my dream job!

How Has the Show changed over the years?
The current production is an updated version of the original Lord of the Dance.  It’s an extension of the original, but bigger and better, and more exciting with new technologies added and some new choreography, but the basis is still the same. It just has a bigger scale. I think the technology is what has changed most over the years. Now there is a big flat screen in the background, a light show and even dancing robots! The show really does have something for everyone.

What do you do when you are not playing the Lord ?
Being the lead is very physically demanding and we rotate between three leads. Normally when you are not lead on a night you would dance in the back line. For this production there are two people of each leading role which helps people get a chance to recover. But even when you are not dancing you are there and often watching and taking notes so that we can always improve the performance and keep it tight

What are your dreams for the future?
This job has been a dream come true for me, and I hope to do it for many years to come. When the day does come when this ends for me I look forward to teaching. My sister Louise has a school back home and I help out with that when I’m home and I love teaching a new generation. 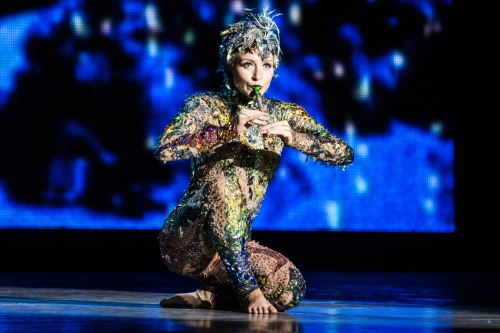 Lord of the Dance: Dangerous Games will perform at the Durham Performing Arts Center on Thursday, October 11th at 7:30pm. For tickets visit https://www.dpacnc.com/events/detail/lord-of-the-dance-dangerous-games

5 responses to “Lord of The Dance at DPAC – Ticket Giveaway!”