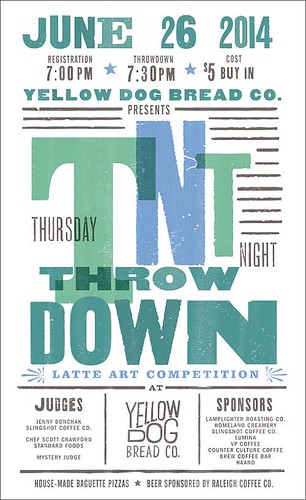 Yellow Dog Bread Company in downtown Raleigh is set to host this month’s Triangle “Thursday Night Throwdown” (TNT) latte art competition this Thursday at 7:30pm. During the event local baristas will compete head to head creating beautiful latte art that will be evaluated by a panel of three judges. The public is invited to attend an enjoy the show. Jenny Bonchak of Slingshot Coffee Co. and Chef Scott Crawford from the soon to be Standard Foods have been announced as judges. A third “mystery judge” will be revealed on Thursday night. 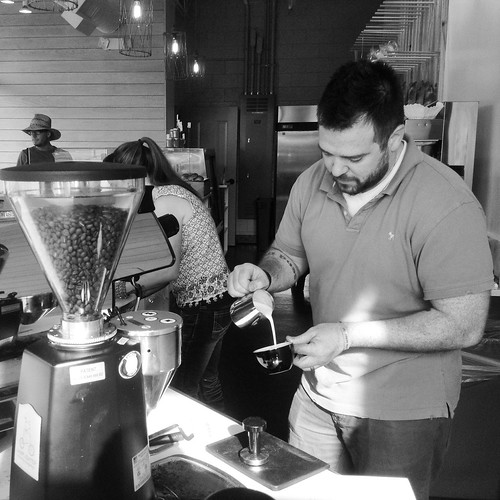 The purpose of these friendly competitions is to cultivate a coffee culture that respects presentation and quality coffee drinks and provides an opportunity for the local coffee community to come together and have some fun! They are also entertaining to attend. In addition to free/pretty lattes (attendees can drink the lattes created during the competition), there will be House made baguette pizzas and local beer from Raleigh Brewing. 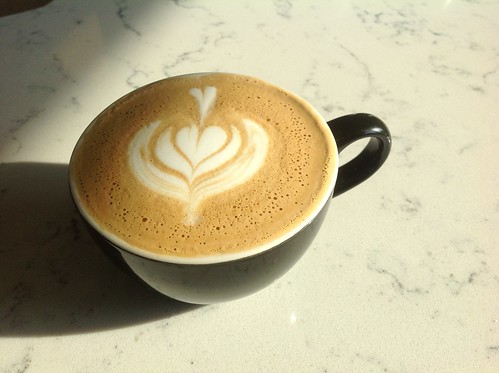 Latte art is typically judged based on four criteria: balance and symmetry, use of space, color contrast and definition, and overall impression.  The judges compare the appearance of drinks based on these factors and decide which barista will move on to the next round. After several rounds of competition, the field is narrowed down to two baristas to face off one last time to crown the ultimate champion of the evening. 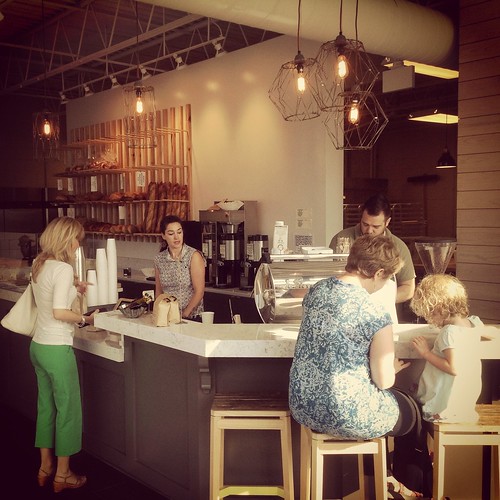 If you haven’t been to one of these events I highly recommend you stop by Thursday night to check out Yellow Dog Bread and watch some of the throwdown. If you share any pictures on twitter of instagram be sure to tag them with the hashtag #TriangleTNT. Thursday’s throwdown is open to the public, free to attend and just $5 to compete.

Sola Coffee & Cafe’ in North Raleigh was the host for the August Counter Culture Coffee latte art competition, lovingly known as the Thursday Night Throwdown or “TNT” for short. As shared in my July TNT recap post, the purpose of these friendly competitions is to cultivate a coffee culture that respects presentation and quality coffee drinks and provides an opportunity for the local coffee community to come together and have some fun!

Sola Coffee & Cafe is relatively new to the local coffee scene being open for only a little over 6 months, but they dove in head first and did a fantastic job of hosting their first TNT competition. The pool of baristas competing was the largest I have ever seen (there were a total of 28) and the crowd of spectators gathered was pretty darn big too.

As always, Lem Butler of Counter Culture did an awesome job of MCing the competition and keeping things moving along seamlessly.  Things got kicked off shorlty after 7pm with the first two baristas going head to head to create their latte art to be presented and scored by a panel of three judges.

Latte art is typically judged based on four criteria: balance and symmetry, use of space, color contrast and definition, and overall impression.  The judges compare the appearance of the two drinks based on these factors and decide which barista will move on to the next round.

Baristas working at the espresso machine

As the competition advances, baristas will sometimes be asked to pour their drinks blindfolded or will willingly choose to use increasingly smaller cups to present their drinks. These variations make creating latte art more difficult and can cause for some interesting results from even the most experienced baristas.

The crowd waiting for the final results

After several rounds of competition, the field was narrowed down to two baristas to face off in the final round.  It was a fun evening that saw a plethora of great pours from the many great local baristas, but it all came down to Austin Oliver of Jubala Village Coffee and Michael Harwood of Open Eye Cafe in the final round.

Both Austin & Mike did a great job, but in the end Mike of Open Eye Cafe was crowned the August TNT champion. With that, he won some prizes and bragging rights for a month before being called on to return to help judge the next throwdown. The details for the next TNT competition are provided below. You can visit my flickr photo album for more of my pictures from the August 2012 TNT Latte Art Throwdown at Sola.

As many of you know I love to cover the local coffee scene on my blog. So I was honored to be asked to help judge the July Counter Culture Coffee Thursday Night Throwdown (TNT) latte art competition at Jubala Village Coffee in North Raleigh. I had a great time watching all my favorite local baristas battle it out in this friendly competition.

The purpose of these friendly throwdowns is to cultivate a coffee culture that respects presentation and quality and it is great opportunity for the local coffee community to come together and have a fun! Below are a few quick pictures from that the July throwdown at Jubala and a recap of the results.

Setting up the brackets!

At the start of the competition, the large chalk board at Jubala was converted into the throwdown bracket where each barista was listed against their competitor for the first round. Baristas had to battle through three rounds of head-to-head competition to make it to the final championship round.

Austin & Kyle of Jubala at the Espresso Machine

Soon after the event started the first names were called and the first two baristas took their places behind the espresso maker to start their “battle”. While the shots are pulled for them by the house barista, each competing barista is responsible for steaming their own milk. This is a crucial step in preparing to pour the best latte art possible.

Baristas free-pour the steamed frothed milk combining it with the espresso shot to create a swirled design in the cup which can feature hearts, tulips, rosettas, or the birdlike phoenix design.

Once the baristas have completed their work, Lem Butler of Counter Culture positions the art under a mounted digital camera set up to a projector so the images can be projected onto the cafe’ wall for the audience to see.

The barista’s creations are presented to the crowd and judges where they are evaluated on several criteria including balance and symmetry, use of space, color contrast and definition, and overall impression. The entire score is based solely on appearance, not taste. Above is a nice example of a tulip poured back in July.

Back in July I was humbled to judge alongside Andrew Cash, the owner of Jubala Village Coffee, and Scott Conary, the president of Carrboro Coffee. Both of these guys know way more about coffee and the intricacies of latte art than I do. Scott actually judges espresso on the international stage at such events like the WBC (World Barista Competition). However, despite my lack of experience they were both awesome and taught me a lot about espresso techniques and what to look for in a latte pour.

The crowd watches the battel unfold

These events draw large crowds to cheer on their favorite local baristas and see the designs they create. After the art is judged the drinks are handed out to a few lucky customers to enjoy, so finding a spot close to the action along the bar can be a little tricky!

Even customers can get in on the action at these throwdowns. The events are open to the public and anyone can compete. All you need to enter is $5 and the courage to step behind the espresso machine!

Of course, it can be a little stressful with the talented competition and so many people watching over you as you pour, but that didn’t seem to be an issue for Daniel of Jubala Coffee (pictured above).

As the competition ramps up and baristas are slowly eliminated the remaining competitors begin to take things up a notch by pouring their latte art into increasingly smaller and smaller cups. You see, the smaller the vessel, the more difficult it is to pour so creating a nice piece of latte art in a smaller cup will beat out of good poor in a bigger cup.

The baristas are also thrown a few curve balls by the event organizers along the way. Like having to pour their lattes while wearing a blindfold or pouring “goofy style” meaning they have to pour the steamed milk using their non-dominate hand (like using your left instead of your right and vice versa). These extra challenges can make for some interesting latte art creations!

In the end, barista Kyle Ramage of Jubala was the victor of the July 2012 TNT. He had some very stiff competition from Katie, a fellow barista at Jubala. Katie poured some incredible designs and is sure to be a strong contender for the title at the next TNT in August.

The July TNT champion had t0 maneuver their way through a sea of talented baristas to claim the title that night. The rest must now wait another month for the next challenge to showcase their skills once again. Fortunately for them, the next latte art throwdown will be tonight (August 30, 2012) at Sola Coffee & Cafe at 7705 Lead Mine Road North Raleigh. The competition begins around 7pm.

I had an absolute blast helping to judge the throwdown. If you haven’t been to one of these before you should definitely check one out, they are a lot of fun. Hope to see you there! Visit my flickr photo album for more of my pictures from the July 2012 TNT Latte Art Throwdown at Jubala.