If you are looking for a fun night out to celebrate NC Beer Month there is a very special cider & beer collaboration dinner taking place at Standard Foods in Raleigh next Monday, April 18th at 6:30pm. Diane Flynt of Foggy Ridge Cider and Fullsteam Brewery’s Sean Wilson have collaborated with Chef Scott Crawford on unique food and beverage pairings for this event.

Guests will begin in the backyard farm with a cocktail featuring cider, beer and Crude Bitters, then be seated for a 4-course springtime dinner featuring alternate pairings of Foggy Ridge Cider and beers from Fullsteam Brewery. Flynt and Wilson will be on-hand to discuss their award-winning beverages, and their collaborative and long-time friendship. I recently visited Standard Foods for the first time and expect the food will be amazing for this dinner. You can view the menu below and purchase tickets for the event here. 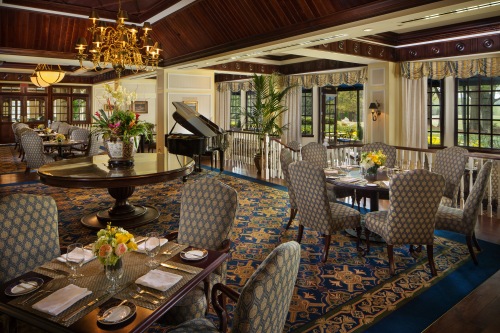 A few months ago I attended a wonderful beer dinner at the Washington Duke Inn & Golf Club, the premier luxury inn and golf club located on the campus of Duke University in Durham. April is North Carolina beer month and this week the Inn is hosting “The Brewer and The Farmer” dinner. This special dinner features another local favorite brewery of mine, Hillsborough’s Mystery Brewing Company and Rougemont’s Prodigal Farm, on Wednesday, April 13 at 6:45 p.m.

Mystery Founder and CEO Erik Lars Myers will join with Prodigal Co-Owner Kathryn Spann to guide guests through this extravaganza and share their expertise along the way. These dinners are a lot of fun and a great way to learn more about the thought process behind the different beers offered by the brewery and how they pair with different foods. Not to mention the Fairview Dining Room at the Washing Duke Inn is an amazing space to enjoy an evening of great food and craft beer.

The Brewer and the Farmer Dinner costs $65 per person, or $54 for Executive Club members. The event will take place on the Fairview Patio, weather permitting.

To make reservations, please call the Fairview Dining Room at (919) 493-6699 or visit the event registration page.

About The Washington Duke Inn & Golf Club
The Washington Duke Inn & Golf Club is located on the campus of Duke University, only twenty minutes from Raleigh-Durham International Airport and ten minutes from Research Triangle Park. The Washington Duke Inn is the only AAA Four Diamond hotel in Durham, North Carolina. Nestled on 300 acres filled with tall pines and hardwoods, the Inn is known for its beautiful facility and grounds, 271 elegantly appointed guest rooms and suites, marvelous cuisine in the Fairview Dining Room — winner of the AAA Four Diamond Award, 2015 Forbes Travel Guide Four-Star Award and Wine Spectator Award of Excellence — the Bull Durham Bar, the Robert Trent Jones-designed 18-hole championship Duke University golf course, and its convenience to local points of interest. It is set apart from other area hotels and conference centers by unparalleled service, a gracious staff, luxurious interiors and attention to detail. For more information or reservations call (919) 490-0999  or visit washingtondukeinn.com.

Did you know the Triangle has almost 30 local breweries & brewpubs? Well April is North Carolina Beer Month and that gives you the perfect excuse to go out and explore some of them. There are also TONS of NC beer month events planned throughout the Triangle over the next few weeks. Everything from special cask tastings to featured beer pairings and dinners. To see the full calendar of events visit http://www.ncbeermonth.com.

In addition to official NC Beer Month activities there are several upcoming beer events that have caught my eye. Listed below are some of my top beer event picks for the end of March and April:

White Street “Koschei the Deathless” Bottle Release – March 28th
Their first bottle release as part of their new “Back Alley Series”. This Russian imperial stout is aged in bourbon barrels and bottled in 750ML cork & caged bottles at 13% ABV. Bottle sales begin at 2pm in the taproom ($13.99 each). Samples available for $2. (info)

LoneRider Showdown – March 29th
LoneRider is taking over Blount Street for another evening of great music, food and of course a ton of great beer. Ticketed Event (info)

Cask on Fools – April 1st
Casks on Fools is the kick off party in Wake County for North Carolina Beer Month! 15 casks from 15 Wake County Breweries will be participating. All local beer, all in one place! Starts at 3pm. (info)

World Beer Festival in Raleigh – April 5th
A chance to sample over 250 craft and specialty beers from around the world. Held in downtown Raleigh’s Moore Square. Ticketed Event (info)