Breaking the 4 minute mile barrier is amazing accomplishment in the running world and this Friday you can watch some of the best local and national elite runners attempt this incredible feat.  The public is welcome to watch the runners take on this challenge at the 2016 Sir Walter Miler Friday, Agust 5th at the Meredith College track. Adding to the celebritory atmosphere there will also be a pre and post race party happening at Raleigh Brewing Company where everal other NC  beers on tap to raise money for Friends of the Mountains to Sea Trail, Craig Thompson of Old Habits will be playing some tunes, and food trucks BO’s Kitchen and Rollin Dogs will be on hand to feed the hungry crowd

The event is FREE but it would great to RSVP on Facebook and share with your friends to help spread the word so the visiting athletes can see just how much the Triangle community supports them. The races don’t start until 8:30pm so it is a great event to catch after hitting up First Friday in downtown Raleigh.

Things kickoff with the Raleigh vs Durham Mile Championship Race followed by a Run Club Relay with 14 different area run clubs represented. Then things get SUPER FAST with the Women’s Elite Mile and the Men’s Elite Mile. If you would like to learn more about the Elite runners there Bios are located here. If you aren’t going to be in Raleigh you can watch the event live on FloTrack Pro.

Following the last race there will be an awards ceremony at 9:30pm at Meredith College Track followed by post-party at Raleigh Brewing Company with beer, music and food trucks.

Have you ever watched somebody run a sub-4 minute mile? Breaking the 4 minute barrier is amazing accomplishment in the running world and on Friday, August 7th, you’ll have a chance to watch some of the best local and national elite runners attempt this incredible feat.

The event is called the Sir Walter Miler and it takes place on the track next Friday at Meredith College in Raleigh. This year’s event will be even bigger and better than 2014 with 33 men and women elite runners, including two Olympians. The event will also feature a “run store battle” and “run club relay” with some of your favorite local runners going head to head in a friendly competition.

The public is welcome to watch and cheer on the runners as well as attend a pre and post party at Raleigh Brewing Company, where there will be six breweries contributing kegs to raise money for The Umstead Coalition. There will also be food for sale by two great local food trucks: Hanu and CockADoodleMoo.

This is a great community event and a lot of fun to watch. I highly recommend you come out to show your support for these incredible runners. For more information about Sir Walter Miler and a full list of the elite competitors and their bios visit the 2015 event website here. 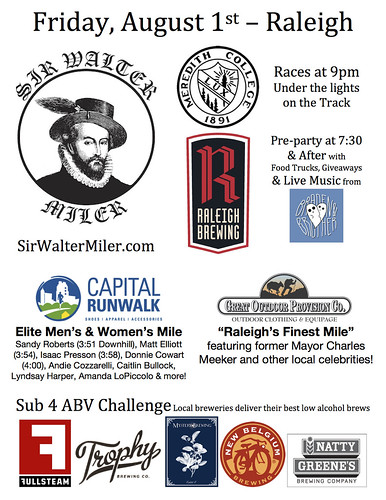