The 6th Annual ‘Cuegrass Festival returns to the Warehouse district in downtown Raleigh on Saturday April 26th 12-6pm. In past years a nice crowd has gathered along Davie street outside The Pit BBQ for the jam-packed day of great ‘cue, local brews and toe-tappin’ bluegrass music! It only costs $5 at the gate to enter (food & beer additional). Proceeds from the $5 gate donation Backpack Buddies & the Food Bank of Central and Eastern NC. 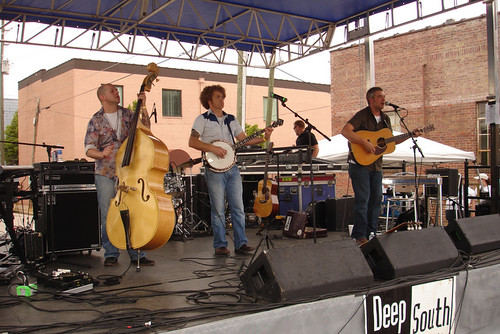 This event is a great way to spend the afternoon outside enjoying great music. Make sure you bring a chair and get there early to grab a good spot as it does get crowded. I also highly recommend a hat and suncreen as there is limited shade. Musical acts planned for this year’s event are Old Habits, The Barefoot Movement, Acoustic Manner, Grits & Soul, and The 23 String Band

The Pit will have the pig cookers fired up to serve plenty of their famous Eastern North Carolina-style barbecue and offer a selection of local brews. This year’s event will feature Aviator, Big Boss, Carolina Brewery, Lonerider, Triangle and White Street. This is one of my favorite spring events in downtown Raleigh. Definitely worth checking out. Enjoy!

Shop Local Raleigh presents Brewgaloo 2012, the first super cool festival of its kind, will be held in downtown Raleigh’s City Plaza on April 28, from 3-9pm. This event supports Shop Local Raleigh and its mission to sustain programs that strengthen our local businesses.

Brewgaloo will feature craft breweries from the Triangle and partners with local food trucks. Entertainment will be provided for guests by live local bands.

General admission is free and includes a pint glass (special unbreakable acrylic souvenir glasses will be available while supplies last). Guests can purchase $1 drink tickets to use for 3oz samplers (1 ticket), or full pints (5 tickets).

Drink ticket pre-sales start on February 20 at: http://shoplocalraleigh.org/care/Brewgaloo and continue through March 20. You can purchase 25 tickets for $20 and receive a FREE acrylic souvenir pint glass.

The first annual Food Truck Harvest at Big Boss Brewery in Raleigh was a tremendous success last week.  The event featured the most popular vendors in the Triangle food truck scene, with the all set up in the parking lot of the brewery.  The lineup included Only Burger, Klausie’s Pizza, Mom’s Delicious Dishes, Bulkogi Korean BBQ, Valentino’s, and India on Wheels.  All of them had crowds of eager customers lined up to try their food.  I heard that the crowd grew so large that several eventually sold out due to the high demand by the end of the night!

Here is a shot of hungry fans eagerly waiting in line for a burger from the guys at Only Burger out of Durham.  They are always a crowd favorite, but the lines at the other food trucks were equally impressive.  I grabbed some pizza from Klausie’s and it really hit the spot.  The serve up a nice deep dish square pizza slice with thick cheese and lots of sauce that goes perfectly with a cold beer from Big Boss.

Inside the brewery the beer taps were flowing nonstop, but the bartenders did an excellent job keeping the lines moving along.  I had a pint of my favorite Big Boss Brew, the Belgian style Helle’s Belle and a pint of the seasonal Harvest Time spiced pumpkin beer.  A stage was set-up inside the brewery next to the bar and several different local rock bands took to the stage throughout the evening.

The Food Truck Harvest at Big Boss was a great way to ring in the Fall season.  I’m looking forward to more events like this and hope to catch the food trucks around Raleigh more in the future.  For more pics from the fest check out my flickr photo album.

This week’s “picture of the week” is a quick shot of the various beers on tap at one of my favorite places, Shucker’s Oyster Bar & Grill in Wake Forest.  I hope to do a full blog post about Shucker’s in the future, but in the meantime here is a quick shot of their draught beer offerings I took while enjoying a beverage at their bar this week.

As you can see they offer everything from Bud Light, Land Shark Lager, Blue Moon, and Fat Tire to Big Boss Bad Penny Ale (which is brewed right here in Raleigh) and Red Oak which is made out towards Greensboro.

As always, please feel free to submit a photo for consideration for future “pictures of the week” by emailing me at TriangleExplorer@gmail.com.

Filed under Picture of the Week