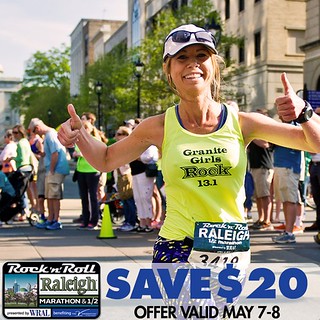 The second annual Rock ‘n’ Roll Raleigh Marathon & 1/2 Marathon returns to the Triangle next year on Sunday, April 12, 2015. Online registration opens Wednesday, May 7th. Participants who register by MAY 8th will receive a special $20 savings. The 48 hour entry level promotional price will be $60 for the half marathon and $70 for the marathon. Visit the official race website to Register now.

To get an idea what the race is like here are my pictures from the Inaugural Rock ‘n’ Roll Raleigh Marathon & 1/2 Marathon held this past April. You can also read my full race recap here. 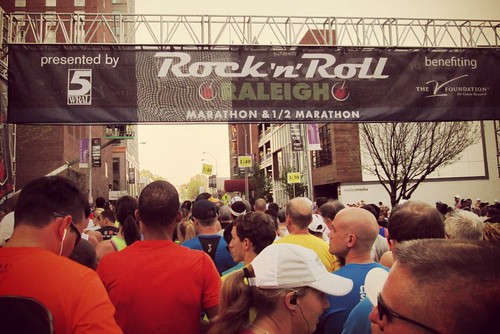 Have you ever run 13.1 miles with a camera? I did just that this past Sunday as I took the streets of downtown Raleigh with 12,500 other runners to race in Raleigh’s Inaugural Rock ‘n’ Roll Marathon & Half Marathon. I was slightly under trained for the race and decided to just have fun with it. No worrying about personal records or stressing over finishing times. I was simply excited to be a part of it all and enjoy the rare opportunity to have my camera with me to capture scenes along the 13.1 mile course. 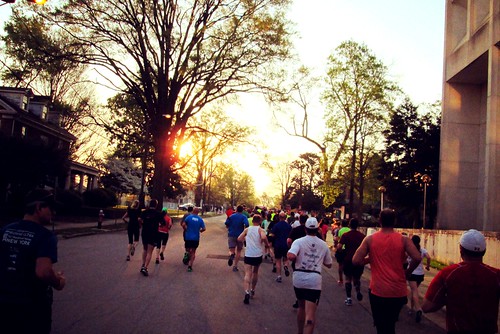 Sunrise as the Race Begins

I started out in Corral #2 because I had optimistically predicted a 1:45 finish time. This of course was before the bleak winter and I  didn’t get nearly as many training runs in as I had hoped. Come race day I knew I would likely finish somewhere closer to the 2 hour mark, but wasn’t concerned about it. It was actually kind of refreshing to not worry about the finish time. It was a beautiful day for the race with morning temps in the low 60’s and expected to reach the low 80’s by the afternoon. We set out around 7:10 just in time to catch the sunrise as it basked downtown Raleigh in it’s warm orange glow. 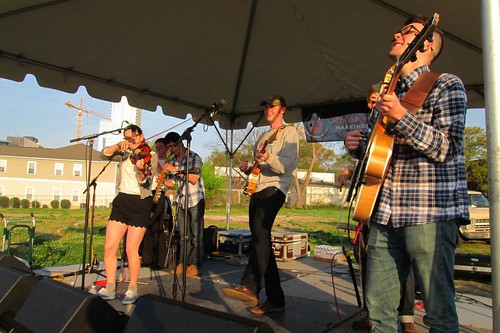 The postcard race course winded us through Oakwood, Chavis Park, Cameron Village, Dorothea Dix, and several other picturesque portions of downtown. Along the way there were local bands  playing every few miles and pumping up the runners with their music. One of my favorites was the Shaw University Marching Band with brass players blasting from a bridge as runners ran below. Another favorite was a band out of Chapel Hill called Ellis Dyson & the Shambles. I loved their upright bass, fiddle, and horn section! I actually stopped to listen to them play for a minute while I snapped a few pictures. It was still early on in the race, but it was a welcome break! 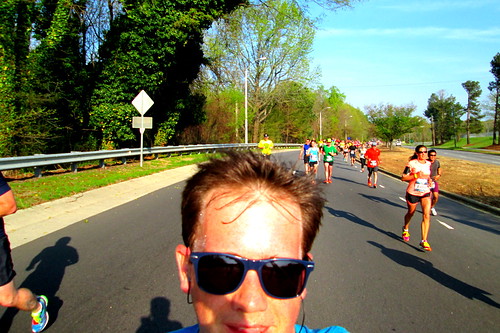 As I made my way through the 13.1 miles I stopped a few times to take pictures of the bands, friends and fellow runners. It was great running into so many familiar faces out on the course. I also enjoyed seeing so many spectators and a few rouge musicians playing along the the route. My favorite was a little girl playing her violin for the runners.  While having my camera out I couldn’t resist trying to take a running “selfie” to capture the experience. The photo above was taken somewhere between mile 8 and 9 on Western Boulevard as we made our way back to downtown Raleigh. 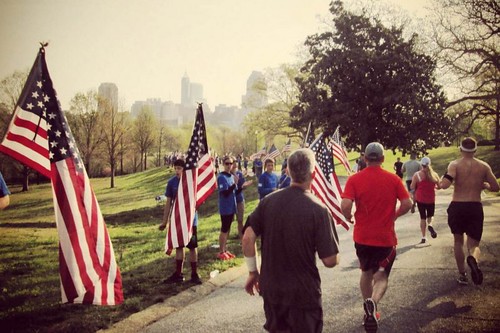 As I mentioned earlier I wasn’t as prepared for this race as I had hoped. It was also a fairly hilly course (Raleigh is not as flat as some people think). I was definitely feeling fatigued as I entered the last 3 miles of the course. I got a huge boost of energy however as we ran through Dorothea Dix Park and saw Tribute to Fallen Soldiers lining the course. Everyone I have spoken to was very moved by this tribute. Seeing pictures honoring the fallen soldiers and the numerous American flags waving in the wind with the Raleigh Skyline in the background gave me goosebumps and the rush of power I needed to push through the final miles. 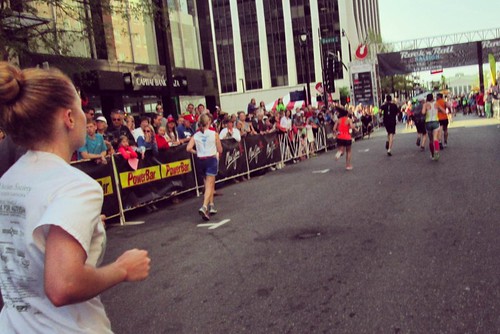 Soon after the course entered back into the core of downtown for the home stretch to the finish line. I was nice to see so many spectators cheering runners on along Fayetteville Street. I took my camera out for one last shot as I approached the finish line. I crossed the finish at 2 hours and 5 seconds. Not a PR but I was very pleased with the time considering the hilly course and the fact I had stopped so many times to take pictures. 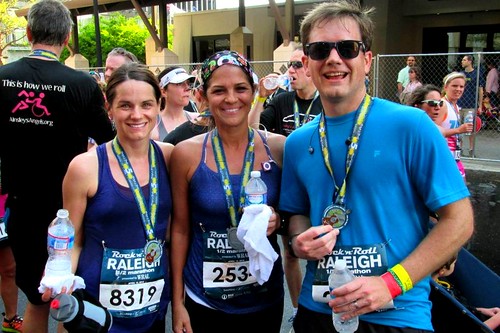 As I crossed the finish I grabbed my medal and ran into Anj and Jill, two of my running friends from the River Run Club, an awesome run club filled with runners of all levels that meets each Thursday to run at 7pm in North Raleigh.  They both had a great race and Jill even pulled off a PR finishing in under two hours on what was definitely a challenging and hilly course. Way to go Jill! 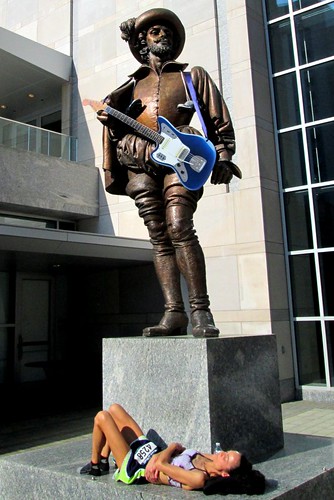 As I made my way from the finish line I grabbed some water, chocolate milk and a banana to recharge and headed over to the Rock ‘n’ Roll Raleigh post race concert. Raleigh his well suited for this with the Red Hat Amphitheater situated just one block west of the finish line. I liked the idea of a post race event like a concert because it gives runners a chance to chill out, drink a beer and catch up with friends to share about the race while it is all still fresh in your mind. It was also simply just a beautiful day to be downtown. 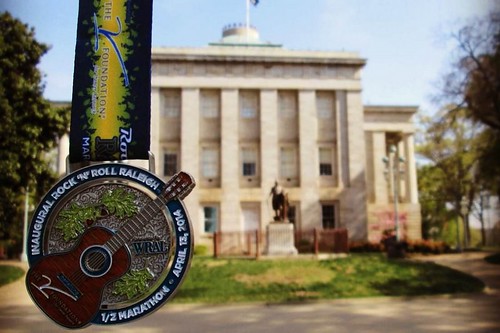 I was very impressed with the inaugural Rock ‘n’ Roll Raleigh race. I thought it was well organized and I loved the route through the downtown street. If you missed the race this year because it sold out, don’t fret. The race is scheduled to return next year on April 12, 2015 and will be held in Raleigh for at least the next three years. Online Registration for the 2015 race in Raleigh will open up in May. You can get additional information on the official race website here.

Update – March 24, 2014 (21 days to Race Day)
As I sit here writing my this training update fresh off an early five mile run, I am coming to grips with the fact that I am not yet ready for the Rock ‘n’ Roll Raleigh half marathon that is just three weeks away. Fortunately I am only doing the half marathon and not the full 26.2, but I am not as prepared as I would like to be by this point. I am not discouraged however. This is not my first half marathon and it will not be my last. I know I will be able to finish in under two hours and run injury free, but I need to let go the notion that a personal record (PR) is not within reach at this race. I’m ok with that. This is my first race of 2014 and I am going to have fun with it and use it to propel me into what I plan to make a great spring and summer of running.

Recent Training
The Triangle weather has been all over the map this winter. One day it is a mild 50 degrees and sunny, the next it is 29 and spewing freezing rain. I am a fair weather runner and I let this affect my training sometimes skipping days when it was just “too cold” to run. I’d get a few miles in on the treadmill, but usually no more than 3 miles at a time.  Now that I am in the home stretch I am committed to running four times a week no matter what the weather and making the regular runs 4 to 6 miles. My most recent long run was 9 miles and I am confident I can build up to 11 miles a week before the race and be able to taper into race day with rested legs. I am excited to race in the inaugeral Rock-n-Roll Raleigh race and think this race is just what I needed to kickstart my weekly running regime, albeit a bit later than I planned in the new year.

Looking Ahead
It is actually a bit of a relief to  know a PR is out of reach. It provides me the luxury the opportunity to take in the full race day experience. I will be relaxed and can take in the sights and sounds of race day. If there was ever a race to enjoy it is this one with the many cool bands that will be set up along the course. I am also planning to carry a small camera with me as I run and will snap some shots during the race to share in a post race recap here on the blog. I may not be as prepared as I had hoped, but I am still very excited to be participating in this race and am looking forward to warmer weather and a great year of running!

The Rock ‘n’ Roll Raleigh Marathon & Half Marathon is Sunday April 13, 2014. Even if you aren’t planning to race it is sure to be a great event to watch and cheer on the racers. For more information about the race and race day entertainment visit the official website here.